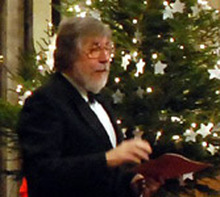 He moved to Kent in 1970 to take up a lectureship at Wye College (University of London) where he soon became responsible for training the college choir and conducting its opera society. In 1972 Berkeley was appointed Director of Music of St. Leonard`s Church, Hythe, a post still held, and where currently he runs three choirs (boys-and-men, girls, and mixed adult). In the 1980s and 1990s the church choir visited many UK cathedrals, deputising for the professional choir, and represented Great Britain in the 1984 International Festival of Polyphonic Music at Loreto (Italy).

In 1976, Berkeley founded the Shepway Singers to be a versatile chamber choir of about 24 semi-professional and good amateur singers. The initial impetus was to mount a performance of Handel’s Messiah in St Leonard’s Church, Hythe, using a choir of about the size the composer intended. Orchestral players came from the London colleges of music and were led by Margot Rusmanis (who happened to be the daughter of a previous organist at St Leonard’s). The musical and financial success of this venture led to the permanent establishment of the choir which now specialises in unaccompanied music (although occasional concerts with orchestra are still mounted).

Until 2016 Berkeley was also Musical Director of Folkestone Choral Society, a role he took over from Mark Deller in 1976 after five years as its accompanist. During his time as Musical director the Society tackled the standard items of the choral repertory that use large choirs, orchestras and soloists, typically several times. In addition there were forays into the less familiar, including Bryan Kelly’s At the round earth`s imagin’d corners and special commissions, such as Michael Lewis’ Gloria to mark the Millennium. Over the years particularly memorable concerts included Vaughan Williams’ Sea Symphony, Elgar’s The Kingdom and Te Deum by Berlioz. The Shepway Singers provided the semi-chorus for several performances of Elgar’s The Dream of Gerontius and Mendelssohn’s Elijah.

Until 2005, Berkeley’s ‘day-job’ was as Professor of Policy Analysis at Wye and Imperial Colleges (London University), where he remains in an Emeritus position. Berkeley continues to act as a consultant to governments and international organisations on agricultural and rural development policy and economic statistics, and regularly contributes to teams carrying out evaluations for the European Union. He has also written extensively, including student text books, research volumes and numerous conference papers.

In the 2018 New Year’s Honours List  Berkeley was awarded the British Empire Medal for Services to Music in Kent, receiving the medal in May from the Lord Lieutenant of Kent, Viscount de L’Isle, at Penshurst Place.